When Kole started school I became a straight hoarder with every single thing he brought home.  I saved all his school work, homework, and art work.  It was almost surprising I didn’t bronze his first pencil!  Ha!  He was my firstborn and I was proud and excited about all the new things he was learning.  So yes, I kept 20 practice pages that had the upper case “A” and 20 practice pages with the lower case “a” and so forth.  Total that up and we were basically buried under a preschool.  Then he started First Grade this year and it was just getting out of hand.  I tried putting them together in regular file boxes and it was ok but I wasn’t in love with the storage technique.  It just wasn’t as organized, durable, or as clean as I wanted it to be.  Remember in the show Friends when Monica’s dad stopped the water from getting to his Porsche using Monica’s boxes and it ruined everything in it?  I’d hate myself if the hard work of those little fingers were forever wrecked.  So I had to have a sit down with my little one and get his permission to let some things go. Although, he can be somewhat of a hoarder about that stuff too, he was on board! Hallelujah!

I kept the first tries, the most improved and the artwork that wasn’t falling apart.  The pieces that were spewing glitter all over the place had to go too.  Those were my worse nightmare.  Thank goodness he was on the same OCD level about glitter as me!  Also, I kept any special certificates and report cards of course.  Now that I significantly downsized the lot, I had to figure out how I wanted to store it.  While I was at Office Depot buying file folders for this project I took a look around and realized plastic storage bins were actually what I needed and were the best way to store Kole’s things for every grade.  This would better protect his academic paper memories for years to come.

After you’ve sorted through all your little one’s paper work, grab your keep pile and file them however you like in the filing folders. 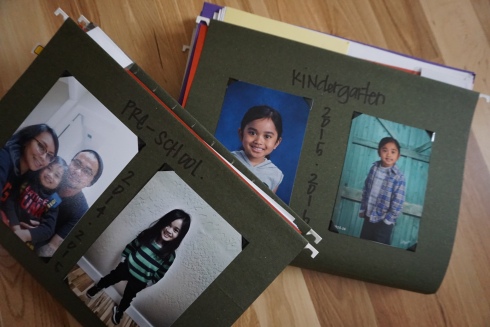 Since we always end up with extra of  beginning of the school year and mid school year pictures I used them to put in front of the file folder as part of labelling.  Instead of taping or gluing the pictures on, I used photo corners to hold the photos in place for added flare.  I love to hand write everything for a personal touch, as I did for the grade and year, but I know many fancy the label makers or printable tags for a more clean, uniform look.  Do you, boo. Do you.

After those folders are everything you’ve dreamed of, place those puppies in your plastic storage bin and bid them adieu until next summer.  But if you’re anything like me, you’ll keep them close by and accessible so you can just purge and fill it up throughout the school year! 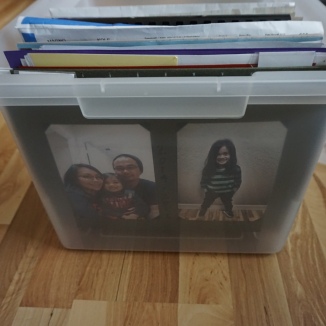 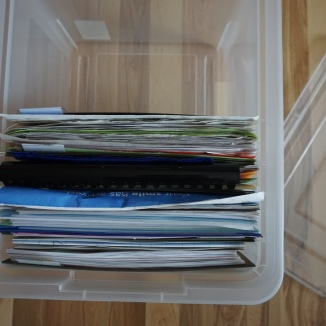 Have a great summer!

"Creativity is intelligence having fun." View all posts by katreyesm